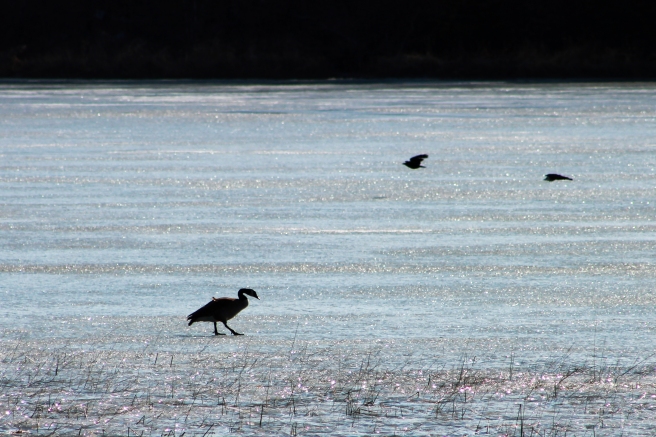 The swans have been patiently spending their days here for almost two months now, two faithful white lumps out on the ice standing guard over their nesting grounds.  The eagles began checking in next, periodically soaring in to keep tabs on the status of the frozen mass obscuring their fishing grounds.  Then the geese arrived, honking in and out (far less devoted than the swans), and the ducks, squeezing in to paddle around the tiny puddles opening up along the edges.

And finally, just yesterday, the loons arrived with their wildly haunting calls.  They never show up until there’s a long enough runway open for their lengthy takeoffs, so it this was the surest sign yet that ice out was imminent. 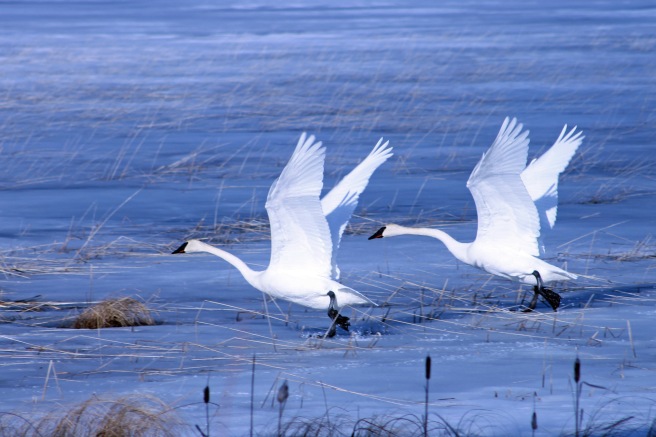 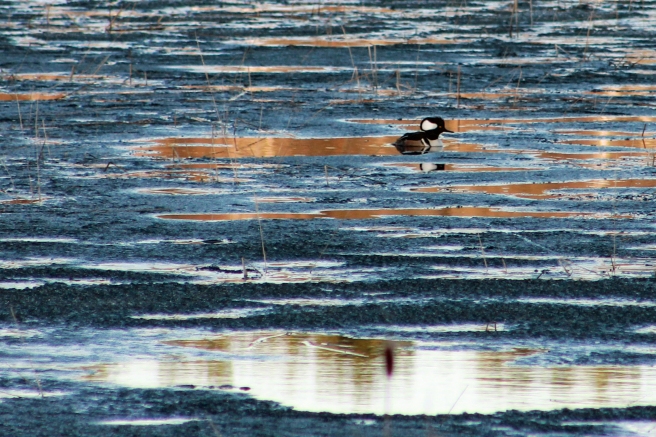 Today, there’s a giant pancake of ice floating out on the lake, and around it’s edges, the waves are moving again for the first time since November.  The wind is shifting it from one side to the other, slowly crushing, consolidating and wearing away at the ragged edges.  I’m watching it recede before my eyes as the day wears on.  In a day or two, or maybe even by morning, it will be gone.

I can feel the exuberance of the waterfowl in my own soul as I watch the lake come alive after it’s long winter’s sleep.  I, too, have missed the twinkle of sunny waves through the shoreline trees, the soothing movement of the ripples reflecting the colors of the sky, the energy of the waves driving before the wind, and the smooth glimmer of its liquid mirror on still evenings.  I think I am surely just as happy as they to know that the reward of our mutual long and hopeful wait is right around the corner.

But I wasn’t worried that it would come, because the promises of God are always true to those who wait for them.  That goes for the change of seasons, as well as a lot of other things too numerous to list here now.  It’s good to remind ourselves of that, especially right after Easter.  The story isn’t finished yet!

“Christ, having been offered once to bear the sins of many, will appear a second time, not to deal with sin but to save those who are eagerly waiting for him.” (Hebrews 9:28) 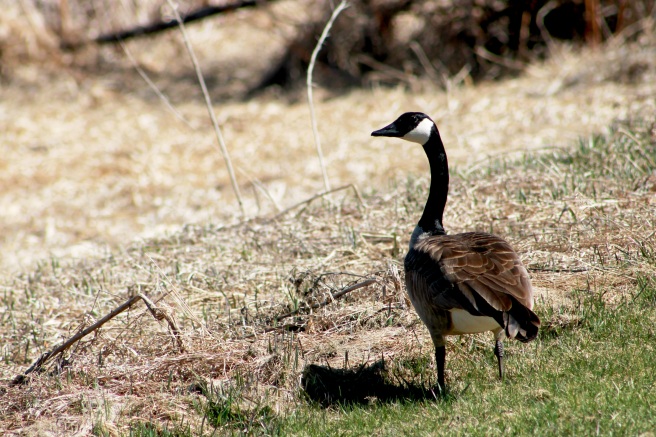 “Look, Mommy, it’s an ostrich!” cried my oldest daughter excitedly from the window.

“No, it’s not—that’s an eagle!” my two-year-old contradicted indignantly after running to see.

At that point, curiosity getting the better of him, Papa got up out of his chair to investigate.

Obviously, a tie-breaking vote was needed, so then I joined everyone at the window.

“Every fact is to be confirmed by the testimony of two or three witnesses.” (2 Corinthians 13:1) 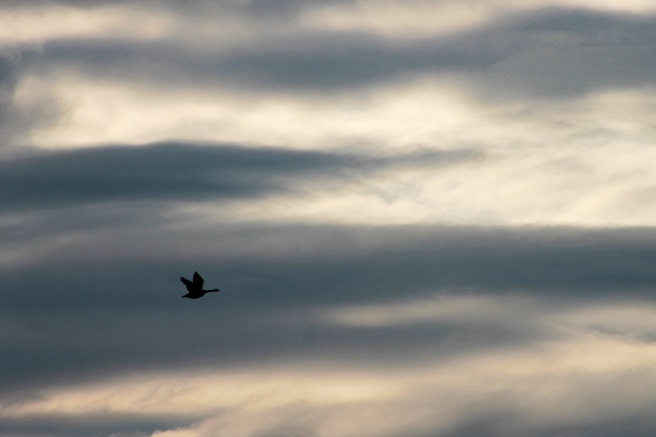 “If I take the wings of the morning, and dwell in the uttermost parts of the sea; even there shall thy hand lead me, and thy right hand shall hold me.” (Psalm 139:9-10) 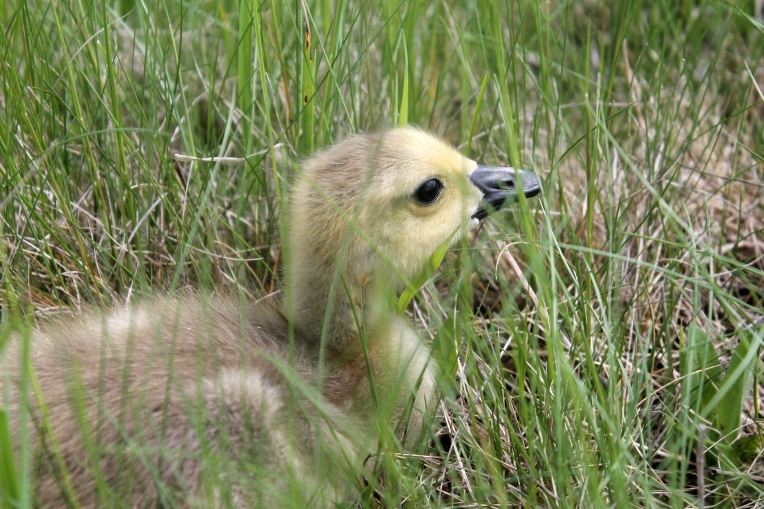 I came suddenly upon a family of Canada geese crossing our driveway the other day.  Almost all of the goslings hurried off as fast as their little legs could take them into the field grass, following their mother who led the way to safety honking wildly in alarm.  But this little fellow seemed to have an independent streak and I imagine he’s the child who has given his poor mother the most gray hairs—er, feathers.

Off he went foolishly running in the opposite direction from his family, right down the center of the driveway in front of me.  I was fortunate enough to have my camera at the ready, and of course, since his legs were very short and he had hardly any wings to speak of, he was no match for me.  I easily caught up with him and snapped a portrait of the wayward little guy before shooing him off to where his mother and siblings were calling for him at a safe distance away.  Silly goose!  Good thing I was just an appreciative human with a camera and not a hungry wolf, or that would have been the end of him. 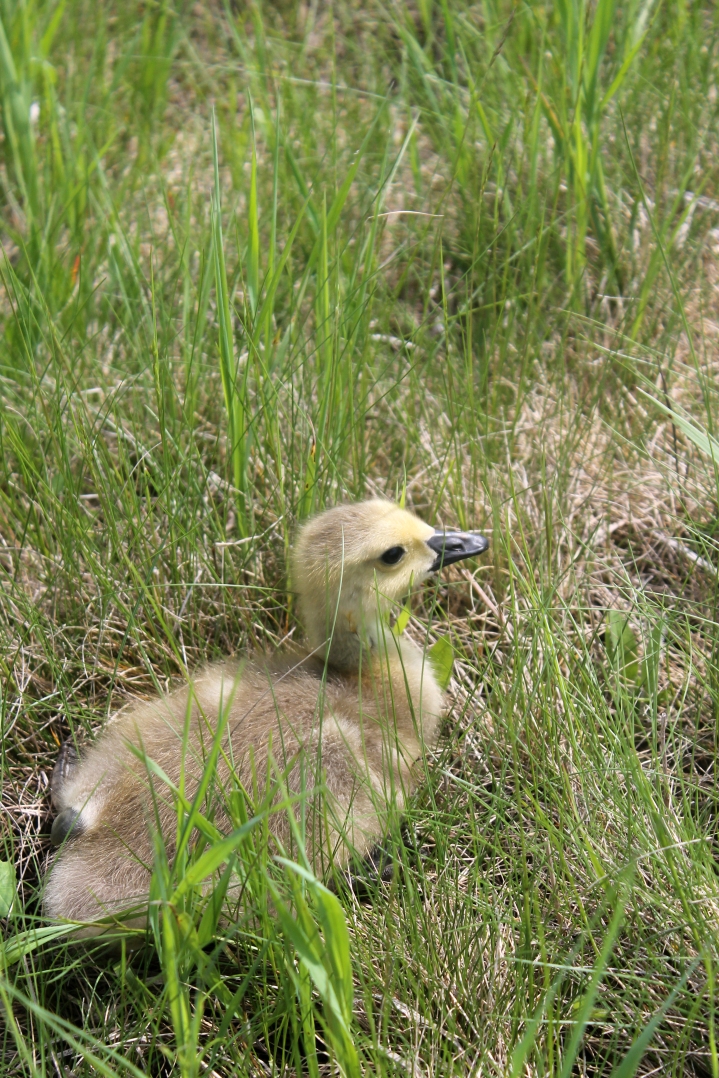 As I watched him go, I was reminded of this passage in Isaiah:

“All we…have gone astray, we have turned every one to his own way…”

Good thing for us the verse doesn’t stop there, or that would have been the end of us, too!

We have foolishly wandered, but He has provided a way to safety anyway.  How unworthily blessed we are!

All photos copyright by Beth Ender. Please do not use or reproduce without written permission.
Loading Comments...