This week, our resident swan pair debuted their newest brood of offspring, parading them very proudly all the way around the lake (for all the neighbors to see, I presume).  There are six cygnets, which might be their all-time record for family size!

There is a shy doe at the edge of the field, who acts very nervous whenever we come near.  I know there’s a tiny fawn hiding in the swampy raspberry thicket beyond where she lingers, though we have yet to actually see him.

After three known unsuccessful attempts (including inside the exhaust pipe of my husband’s truck), last year’s swallows have finally settled on a place to build a new nest.  Incidentally, it’s in the exact same place as they built the last one.  Silly birds.

A mother rabbit went bounding off from my parent’s garden when I was visiting there earlier this week, scared by the dog.  She left this wee cutie, with brown eyes almost as big as his ears, crouched obediently close to the ground.  He didn’t move a muscle, even when I took this picture: 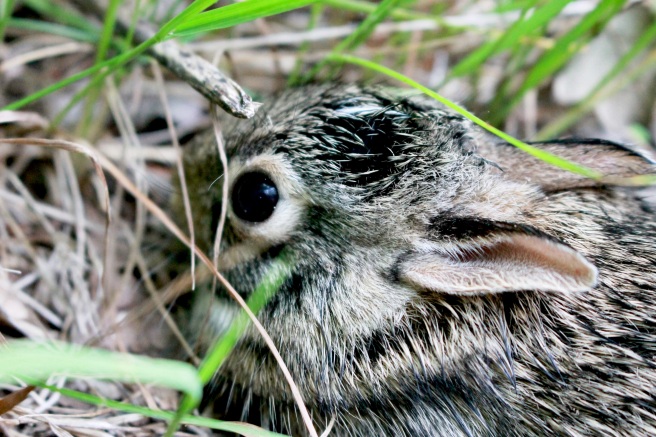 It’s been baby time everywhere we look outside lately—and then, finally, at 6:45, just after the pearly gray dawn of a Wednesday morning, it was our turn.

A tiny baby voice cried out for the first time in the little house on the edge of a lake, while outside in the gentle rain the swan family paddled softly through the lily pads in search of breakfast and the swallows twittered busily around their almost-finished nest.

“A woman has pain in childbirth because her time has come; but when she brings forth her child, she forgets her anguish because of her joy that a child is born into the world.” (John 16:21)

“Weeping may endure for a night, but joy cometh in the morning.“ (Psalm 30:5)