When the giant rhubarb leaves began to unfurl their creases and wrinkles out by the milk house this spring, it was hard not feel a little happy-sad at the sight.  One of the plants in my flourishing patch, the best one on the end with the slenderest brightest red stems,  isn’t original to the property like the others are.  It was a gift to me the spring I was a new bride, expecting my first child and eagerly planning our very first garden at the house we had recently moved into.

I had stopped at my nearly 90-year-old grandpa’s house to pick up a few of the vegetable plants from his little homemade greenhouse, the extras from his own ambitious garden that he had always offered to family year after year.

“Do you have any rhubarb at the new place?” Grandpa asked, as he tucked sturdy tomato plants, peppers and cabbage into a wooden flat for me.  The white Styrofoam cups squeaked against each other as he splashed them liberally with a scoop of collected rainwater.  He scrawled the variety names onto a yellow page from an old auction receipt book, garden dirt beneath his nails, fingers big and rugged around the stub of a pencil.  “Rutger is a new variety,” he noted.  “Nice and early, and great flavor.  I searched all over town to find seed after I tasted one last year; finally found it at Fleet for ninety cents a packet.  Can’t beat that price!  Oh, and you’ll want some of these Sugar Cherry, too.  Just like candy.”

I nodded in agreement, then replied, “No, there’s no rhubarb at our new place; I’ll be able to get some from Mom’s garden, though—“  But he hadn’t heard the last part of my sentence, only the word “no”.  “My rhubarb really took off this spring,” he said proudly, grabbing a shovel leaning against a nearby shed, and heading off purposefully towards the garden.  “I’ll dig you up one.”

Pleased at the unexpected offer, I followed him along the little path through the row of pines that separated the house from the garden, ducking and stepping high to miss the elaborate system of electric wires that guarded his carefully cultivated vegetables from hungry critters.  A row of butter crunch lettuce made a brilliant yellow-green ruffle against the black dirt of the freshly tilled soil; further down, I could see the shadows of more greenhouse plants like the ones he had put in a flat for me, growing sturdy beneath their hand-cobbled mini greenhouses of wire and plastic.  As usual, his garden was in weeks before anyone else’s and thriving.  He stooped to pull a couple radishes, shaking off the dirt before he handed them to me.  “You better take a couple of those, too.” 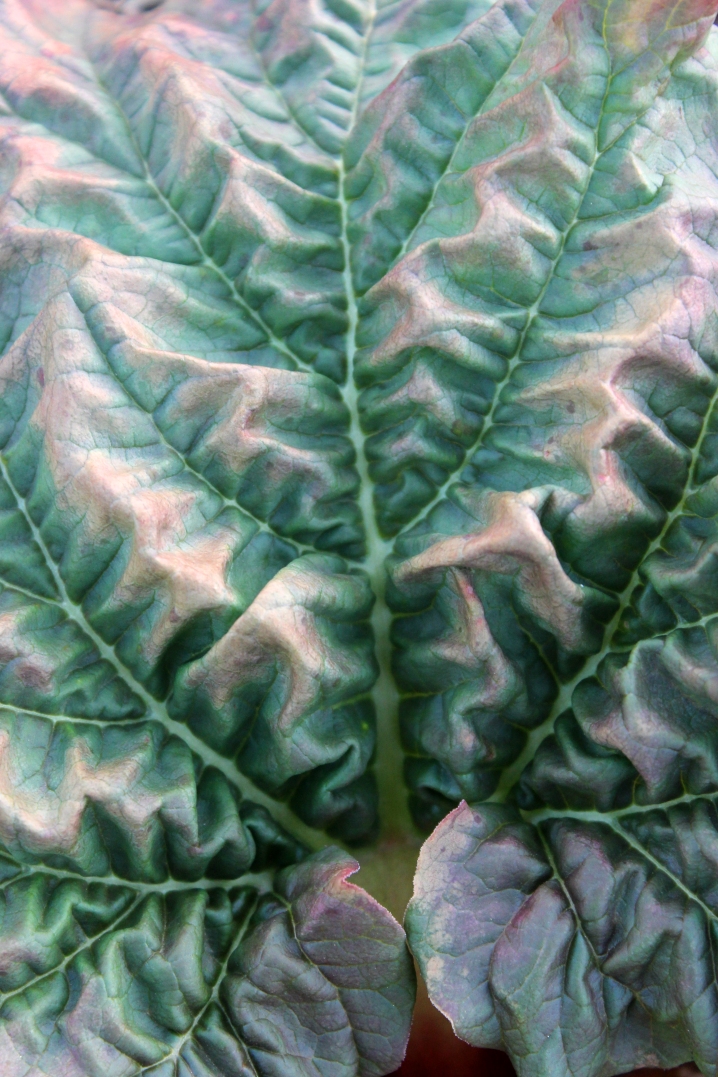 Up by the raspberry patch, he searched among the big leaves of the rhubarb until he found an off-shoot plant, just the right size to survive a transplant well.  He lifted it out and I held a plastic shopping bag open.  He dumped it unceremoniously inside.  It always boggled my mind how he could treat tender young plants with such carelessness yet have them perform so beautifully under his care.  If only the plants under my care could grow half so well—was that careless confidence the key, I wondered to myself?

A generous splash of water back at the greenhouse was the finishing touch.  “Put some good manure around that when you plant it and you should have rhubarb to pick next year,” he declared confidently, wiping his hands off on the sides of his tan coveralls.  I tucked the bag into the back of my vehicle next to the flat of tomatoes and promised to take good care of it.

When we moved again the following spring, that rhubarb plant came with me even though I was aware that there was already a well-established patch at our new place.  Being transplanted twice like that set it back for a while, but by the next spring, thanks to several of those recommended scoops of “good manure”, I pulled my first stems of Grandpa’s rhubarb.

I mixed up a batch of old-fashioned rhubarb custard bars first, the kind I have fond memories of my mom making for us when I was a child.  The small red squares of stem glimmered like tart pink jewels encrusted in the creamy yellow custard, and I thought smilingly of Grandpa as I sampled a sweet slender square still warm from the oven.  I told him of my success the next time I saw him.

Last fall, Grandpa went home to be with the Lord, and so this spring, the little tractor and plow that he used to turn the soil to velvet sat silent in the shed.  His rhubarb plants unfurled and went to seed because no one was there in the little white house beyond the pines to pluck off the seed pods.  The greenhouse was sold at the estate auction to a neighbor and the little bent wire plant cages covered clumsily in plastic and held together with twine went into a dumpster.

But out by my milk house, a little piece of Grandpa’s love for the soil grew on.

I thought of him as I walked out one dewy morning with my little girls, his first great-grandchildren, to pick the first stems of the year.  I showed them how to reach down low to pull the stems so that they didn’t break and nothing was wasted, remembering his very last words to me as he grasped my hand from where he lay on the hospital bed.  “You take good care of those little girls now.”  The admonition echoed in my mind as they pretended that the big leaves were umbrellas and used butter knives to “help” me cut the red stems into small squares when we got back to the house. 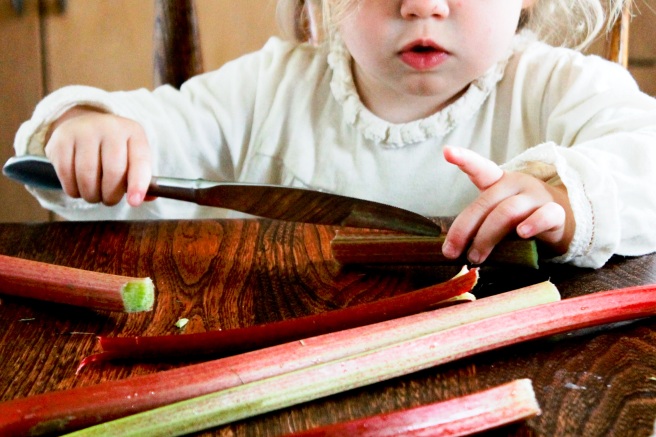 I beat together sugar and golden-yolked farm eggs, and folded the tart chunks into the yellow custard while they stood on chairs and watched.  The legacy of love for things that grow had begun for yet another generation and I knew Grandpa would be pleased.  Later, I thought of this Scripture passage as I pulled the pan of bars out of the oven and set them on a rack to cool:

“How blessed is everyone who fears the LORD, Who walks in His ways.  When you shall eat of the fruit of your hands, You will be happy and it will be well with you.” (Psalm 128:1-2)

That was Grandpa, literally and figuratively.  Because he also left behind a legacy that was much greater than a love for things that grow from the earth.  The greatest legacy he left behind was a deep love for the Creator of the earth.

There’s a well-used Bible, liberally highlighted and underlined, stored safely at a family member’s house now, with a long list of dates in the back recording each time he had read the beloved Book from cover to cover.

It’s the one physical thing we have left as a testimony to his decades of walking with the Lord and we treasure it.  It is my greatest hope and prayer, however, that this legacy won’t remain locked up tidily in a safe to crumble away and die there like my rhubarb plant would have without sunlight and soil.  I hope it, too, will send out little shoots, and grow and flourish for generations to come, not in the fertile black soil of a garden, but in the soil of my heart, and the hearts of all his children, grandchildren and great-grandchildren and beyond.  It was his greatest desire as he died, and will, in eternity, be his greatest joy.

“I have no greater joy than to hear that my children are walking in the truth.” (3 John 1:4)

And best of all, even when all the things of this earth pass away, including all rhubarb plants of sentimental value—that is a legacy that can never perish or be taken away.

For more happy memories of my grandpa, see here.

8 thoughts on “Rhubarb and a Legacy That Lives On”