The theme of my flower garden this year was, officially, low cost and low maintenance.  Low maintenance, because I knew I’d have less time than ever with a newborn this summer, and low cost, because why spend money on something I might not even have time to take care of?

A few days before our third daughter was born, I thinned out all the baby cosmos plants that had self-seeded from the year before.  Then I filled in the holes with miscellaneous flower seeds leftover from previous years.  And then I abandoned it to grow, hoping the emerging seedlings would somehow trump the inevitable emerging weeds without any help from me, and that when I came out of the fog that is life for the first month or so after a baby is born, there would be a garden full of flowers.  It’s not exactly my recommended method of flower gardening, but I figured it still might be better than nothing.

A month or so later, when I remembered again that I had a flower garden and went to see what had become of it, I was surprised to find that the flowers had actually triumphed over the weeds.

The only problem was—the conqueror had been the cosmos, and the weeds were not the only victims to languish in it’s shadow.  I looked in vain for the calendula, foxgloves and cone flowers, and finally located a few pale lupines.  Deep beneath the jungle of feathery giants, were some sickly zinnia plants.

Obviously I had not thinned the volunteer cosmos quite as well as I should have.  So much for my idea of a mixed flower garden. Sigh.

Well, anyway, I was just happy to still have some flowers growing on a year I didn’t have much time to invest in caring for them.

Then, one day in August I glanced out my kitchen window and noticed something glowing brilliantly coral in the midst of all the pink.  I hadn’t planted any coral colored cosmos.  I don’t think there’s even such a thing.  I went out straightaway to investigate.

That’s when I discovered that the pale zinnias I had dismissed as failures hadn’t languished in the shadow of the cosmos after all, but had pushed through sturdily and bloomed.  And they weren’t even stunted.  They were magnificent! 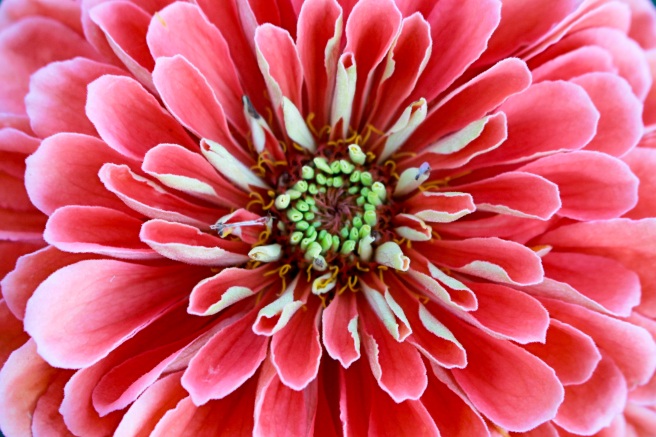 And so, the moral of the story is:

When it feels like the entire cosmos, er, universe is against you, don’t shrivel up and languish like a calendula.  Don’t wither away like a halfhearted cone flower or foxglove.  Be a zinnia.  Dig your roots in deep into Christ, push your way through the overwhelming obstacles, and grow.

“Who shall separate us from the love of Christ? Shall trouble or distress or persecution or famine or nakedness or danger or sword? As it is written: “For Your sake we face death all day long; we are considered as sheep to be slaughtered.” No, in all these things we are more than conquerors through him who loved us.” (Romans 8:35-37)

4 thoughts on “In Spite of the Cosmos”

All photos copyright by Beth Ender. Please do not use or reproduce without written permission.
%d bloggers like this: