I’m standing at the back of a church sanctuary.  The overflow area has been opened, and they’re setting up more chairs.  The front is packed; more people are filing in to fill the back rows.  The stage is overflowing with flowers, plants and one stuffed bobcat.  And I think to myself: this is the picture of a life well lived.

Of course, as everyone says, Arnie was a bit of legend.  I just sit back in awe and listen to the stories of a man who knew the forest for miles around like the back of his hand, who just as intimately knew the ways of the creatures who lived in it.  His was the spirit of the pioneers, rugged and determined, undeterred, even buoyed, by the prospect of challenge or hard work.  He waded the twining maze of ponds and creeks, walked the trails for miles, and worked willingly with his hands, comfortable with the strength of his own arms above the convenience of mechanics.  If anyone has ever lived out that Biblical exhortation—“make it your ambition to lead a quiet life and attend to your own business and work with your hands.” (1 Thess. 4:11)—Arnie certainly did. 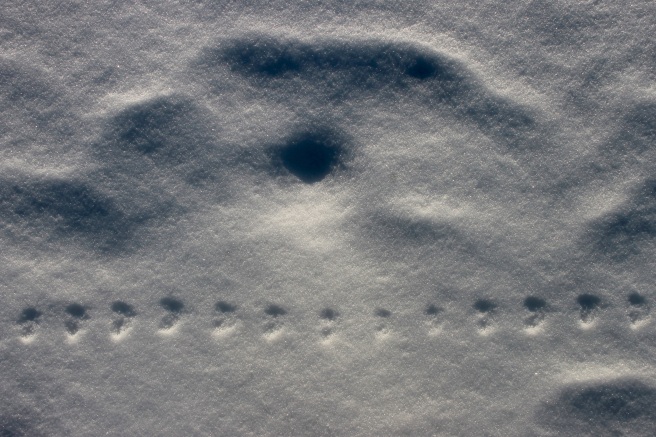 There will always be a picture in my mind of Arnie, from my frequent viewpoint at the piano, that lean figure over by the east windows in his preferred row at church, denim jacket peppered with Trappers Association patches, big grin spreading from ear to ear.

Considering the sort of man he was, I knew I’d received a high compliment the Sunday he came up to me, shaking his head and grinning from ear to ear, to tell me he was impressed.  Earlier that week, in sheer desperation, I’d used a shotgun for the first time in my life to kill the groundhog menacing my vegetable garden, with a single (lucky) shot, and he’d heard the tale.  I remember thinking that maybe I could be a little proud of myself if I’d managed to impress a man like Arnie Peterson.

I ate a wonderful pie once made entirely of wild berries Arnie picked, made by his wife who shook her head when she described how he just kept “coming in with more”.

I remember Arnie in hip waders at the side of the road, not too engrossed in his labor of hoisting all manner of mysterious trapping gear into the back of his truck to wave jauntily over his back.  He didn’t even know who he was waving at.  He just waved because that’s what Arnie did.

And how could I forget the time Arnie knocked at my back door, grinning from ear to ear again, to tell me I had to come see the beaver he’d just pulled out of the lake in front of our house?  Of course, I walked out to admire the flat-tailed, yellow-toothed giant lying in state in the back of his pickup truck, and listened to the full tale of how he’d finally caught the culprit that had been felling our poplar trees.

Yes, Arnie was a legend, and I’m sure that had something to do with the number of people flowing through the church doors on this March afternoon.  But there was something else, too.  There have been other skilled woodsmen who have lived and died as crusty, crabby old men.  For all their amazing practical knowledge, their circle of friends remained small, their influence narrow.

No, this was more than a circle of mere admirers.  These people were not here based merely on the (staggering) number of ermine, muskrat and bobcat he’d trapped in his lifetime.  They were here because Arnie made tracks in their lives.  Not the hippity-hoppity sort of a rabbit bounding across the snow or the measured tread of a wolf in creek-side mud, but that elusive kind that is not to be found on the forest floor.  It was the kind that sinks in, makes an impression and stays long after the trapping stories fade into folklore-dom.

Because Arnie loved Jesus, and so the love of Jesus filled him and spilled out into the lives of those he came in contact with.

Because Arnie could quote John 3:16, and would use it to preach the simple and beautiful gospel message.

Because Arnie would love to bow his head with you and help you pray the sinner’s prayer.

Because Arnie knew, and let those around him know, that his last breath on earth would be his first in heaven—and he hoped to see you there. 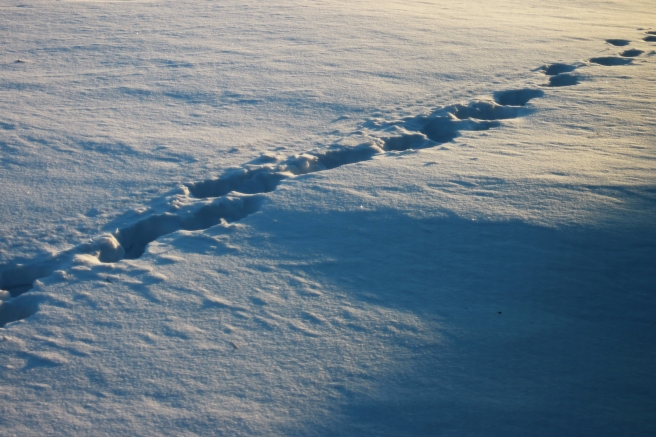 I’m sad that Arnie will never get to teach my children about the tracks of fisher, bobcat and mink as we’d discussed after church only one week before he went home.  We never suspected that he’d made his last trek through one of those double doors so soon, and as abruptly as a rabbit trail ends in the wing-print of an owl, be off to praise his Maker in person.  But he’s left his own tracks of far greater worth across the landscape of our church and community, that will not be obscured by tomorrow’s snowfall, and will bear fruit into eternity—and for that, we’re all grateful.

“Blessed is the man who fears the LORD, who greatly delights in His commandments…his heart is steadfast, trusting in the LORD…[he] will be remembered forever.” (Psalm 112:1,7,6)

“So everyone who acknowledges me before men, I also will acknowledge before my Father who is in heaven.” (Matthew 10:32)

2 thoughts on “The Tracks We Leave Behind”