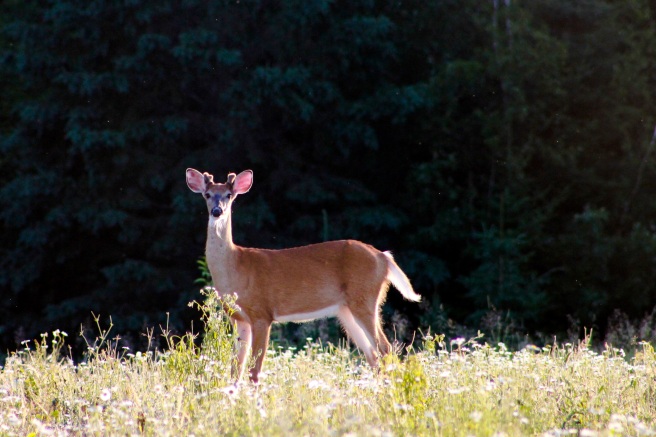 It should be noted that, since there is no hunting season on shooting photographs, I generally secure my photographic venison on whatever random day of the year and in whatever random location (such as my flower garden) it presents itself.

I actually took this one’s portrait back in July, when his antlers were still velvety knobs—but since it’s Hunting Season, which is as good as a national holiday in this neighborhood, it seemed like an appropriate time to join the fun and talk about the deer I “shot” this year, too.  I suppose that the fellow above would hardly be considered a trophy, but like most hunters, I also find that the bucks are elusive and capturing one, however short his antlers may be, is something worth celebrating.

He was foolish enough to pause before bounding off with a woof, so he is literally my first buck, at least so far as I can tell for sure.

See?  There he went, after that long curious look, finally deciding to flee the lady with the giant black eye.  He will, however, have to call upon more wariness than that if he doesn’t wish to be caught by his foolish hesitation and end up in small packages in someone’s deep freeze within the next couple weeks!

“The prudent sees danger and hides himself, but the simple go on and suffer for it.” (Proverbs 27:12)